Here is another map I drew during my daughter's appointment. This is a temple sanctuary building, part of a temple complex. 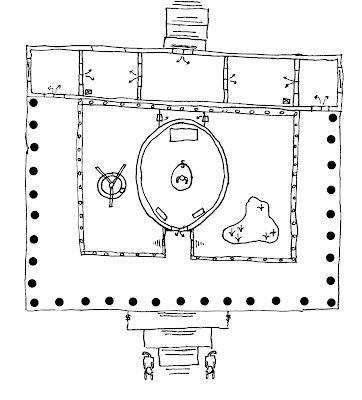 Two temple guardian statues sit at the front stairs that lead up to an open veranda. The roof is held up by two foot pillars. The inner railing (pillars again) overlooks a sunken garden. A well is on the left side of the garden, and a pond is on the right side. There is a tool storage room that connects the gardens in the back. In the center, the oval sanctuary contains a large 30-foot statue of the resident deity on a raised dais with an altar behind. The back of the temple is a series of rooms, including the rear priest's entry hall, a robing room on either side, and two staging halls in the corners.

The temple complex is also fortified to prevent raids by bandits. The temple has 4-inch oak bars for all the doors. In case of attack, the priests would withdraw to the rear chambers, especially in the two robing rooms, in which both sets of double doors can be barred. Each of these robing rooms has a hidden trap door that leads into the crawl space beneath the building. These tunnels lead to the two secret doors on either side of the front steps, perhaps allowing the trapped priests to escape under cover of night.

I need a triangle. Badly.

Email ThisBlogThis!Share to TwitterShare to FacebookShare to Pinterest
Labels: Maps