Marcon Ethring was the 3rd son of the 23rd Duke and Duchess of Galbowdran. His father was the brother of the king and Marcon was an Earl. The king had 3 sons and a grandson, Marcon was 8th in line to the throne.

On the day of the king's only daughter's wedding, a grand occasion and national holiday, Marcon lay ill in bed, having caught the last puke-thrall of the spring. He watched the festivities from his room in the north tower. All we gathered and the ceremony was begun, when a flash and a thunderclap interrupted the proceedings. There stood Felonius the Sorcerer, who had long sought to destroy the king and control the country for his own evil ends. The powerful sorcerer quickly killed the court wizards by summoning a demon from the pits of Hell, and then killed the entire royal family with vast explosions of fire.

Marcon knew that he was in danger, so with the aide of a faithful servant, he stumbled down into the dungeons to find the secret escape out of the castle. They found the captain of the guard in a dank cell, put there by the king for a drunken slight the night before. Marcon released him and told of what had transpired. The three of them fled the castle.

After two months of hiding in the Shadow Forest, word arrived that Felonius had been put to flight by the last dying act of the chief wizard, who summoned a holy guardian who expelled the demon and threatened the sorcerer.

Marcon's coronation as king was a somber affair, and he quickly began to rebuild the country. Once things were in order, he began his search for the sorcerer Felonius. 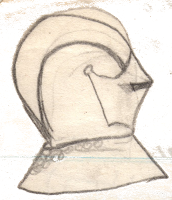 (The illustrations on this page are the originals I drew in the early 1980s. I'm still working on getting scanned versions I like.)