Hexcrawl/Sandbox for Warriors of the Red Planet 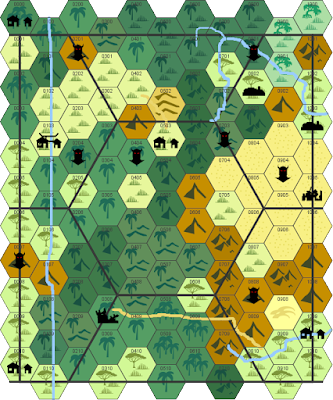 I'm way deep into Warriors of the Red Planet, the Sword and Planet D&D clone. I wanted to do some solo hexcrawling to get used to the system. Well, the first thing I needed for that was a map.

I recently used Delving Deeper to do this same thing for a generic solo hexcrawl, though I had a map already, the Outdoor Survival map. So, I thought tweaking DD's mapping and hexcrawl methods would work well.

First I generated the map. I used DD's Table 2.12: Random Wilderness Terrain to generate the terrain, but I changed each Woods result into Jungle. After rolling the first column of the map, I used the two adjacent hexes together to create the second columns hex. I made one die roll and checked both columns of the terrain table. If the result was mutually exclusive, I rolled a die to decide or simply picked one I wanted. If the results were compatible with each other, like Mountain and Jungle, I used both.

For this map, if I rolled a River result, I then rolled a d20. On a 20, I replaced the river with a Canal, then using a coin flip to see if it is North-South or East-West. After that or if the d20 is not 20, a River result is just a river. In other words, if you get a Canal, you can't get another canal on the same map.

The canals were a feature of a jungle world I had been thinking about for a couple months or so, and this map was a way to test it out. The canal on the left of the map is a mile wide and carved with precision orbital fusion lasers thousands of years ago. They run straight north/south or east/west 500 miles apart. Vast high tech bridges cross every 100 miles. These canals circle the planet. The zero-180 degree meridian canal, the 90-270 degree meridian canal, and the equator canal are all 5 miles wide.﻿

Then I used the WotRP Random Name Generator for village and town names, and the Random Wilderness Encounter tables for lairs.