The Perilous Wilds and Freebooters on the Frontier: addenda to Dungeon World

I'm venturing into the world of Dungeon World, and I picked up The Perilous Wilds and Freebooters of the Frontier for the addition of some old school random goodness to the story game. These supplements revert DW into an emulation of OD&D with just four classes. I really like it.

I tried out the random region tables and procedure for defining the play region, and I came up with a map and some interesting locations in it.

Here's the map and key: 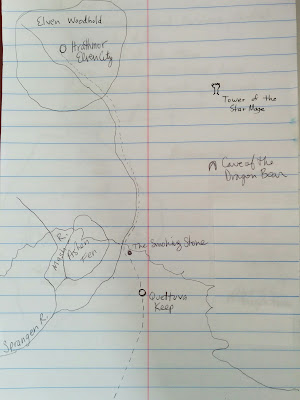 I had already placed the keep before I rolled traits, so I would move it to the river, and put it on a bluff over the water, so it could also watch over river traffic.

In the village that has grown up surrounding the keep, there is a tavern called The Brewer's Taproom where the PCs congregate and recover.

The area to the north is forest verging on jungle. The trade road leads to the elven woodhold centered around Hrothmor, the elven tree city.

The ancient civilization of the area was the Caprini Confederation, a polity ruled by a loosely-allied group of sage-wizards. This confederation fell to a massive barbarian invasion. The remnants that remain are the Towers of the Sage-Wizards.

An area in the region is the Ashen Fen, an ash-choked swamp where anything struggles to survive. The rumor is that a barbarian army died here, burned by magic, and that evil lingers here.

Where the trade road enters the forest stands another reminder of the invasion that raged in the area. The Smoking Stone is a twenty-foot tall menhir that stills emits a cloud of retched smoke that fills the slight depression around the stone.

To the northeast is a lair of a strange creature, the dragon swine, a fearsome evil monster that can fly and hypnotize. This lair contains four individuals, a prehistoric male, an ancient female, and 2 young dragon swine. This family is lost and injured, holed up in a cave recovering, until they can venture forth and find their home.

North of the cave is the Tower of the Star Mage, one of the sage-wizards. It has stood empty for centuries. The star mage's name was Deszirian, and his magic was tied to the stars. The tower is guarded by a flock of giant geese, hostile and aggressive guardians. The main treasure of the tower is a fantastically complex orrery of the heavens made from gold, silver, and precious stones. There is an observatory on the roof of the tower as well.

The method outlined in Freebooters really helps guide your imagination. I can hardly wait to try it with a group.