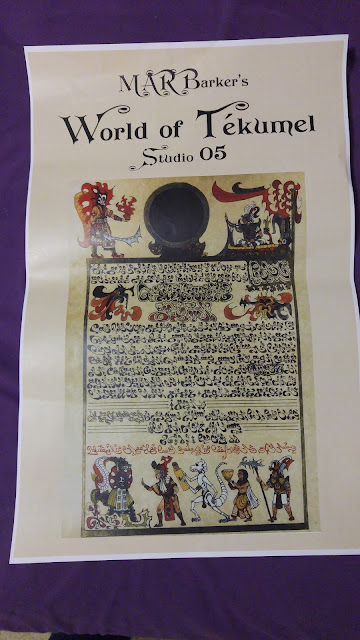 The weekend of February 10-12 was the third year that I organized a Tekumel Track at Con of the North, and this was by far the most biggest with 60 hours of games scheduled. Every time slot had two or three games. The con gave us a big room with eight tables, which was much different than last year's small room with two tables. I was very excited when I first walked in. Overwhelmed in fact. Now they were all round tables,  and we had asked for a 6x10 foot square table for the two miniatures events. (Jeff Berry got three of the four tables moved, and then got the last table from the con staff to get it changed out. He was helpful with logistics all weekend.)

We had many first-time Tekumel players, and only three events didn't run due to lack of players or scheduling snafus. We had several out-of-state attendees to the Track, including Krista Donnelly who ran two games, Bill Acheson who ran two miniatures events, Victor Raymond who had three games, Stephen Vossler who ran a city-building tile game, and Alva Hardison who ran a game.

Thanks to the contributions to making things run smoothly. Stephen Vossler brought his archive of Tekumel art, which he plastered on one wall of the room. Jeff Berry made signs using Lady Vrisa's arrest warrant to place around the con (shown above), as well as the previously-mentioned furniture moving. Don Kaiser printed a schedule.

Next year, we are thinking of having more miniature events, better signage, and yet more games.