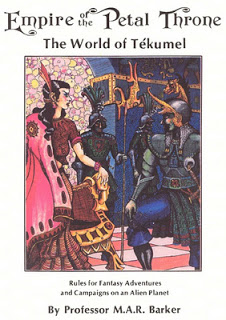 Many months ago, I took on the challenge of writing a Tekumel game for the OSR. Now as I begin playtesting, I thought I'd share the design process.

In 1975, Empire of the Petal Throne was the first full setting ever published. It gave the planet's long history, the current situation and politics, creatures, non-humans, treasures, and maps of the known world. The game system was derived from D&D and was the first clone. It has several innovations and a different magic system. Since EPT is firmly in the OSR, I chose it as one of the bases that I drew from for inspiration.

My goal for this project was to create a set of rules that would require a minimum of translation to play EPT characters. The process of creating the character could be different, but I wanted the result to be recognizable, very easy both for someone who knew EPT, as well as someone familiar with D&D. I didn't want an exact retro-clone, but a neo-clone -- further from the original, but still comfortable.


The first thing I did was yank the essential rules for analysis. First came the Basic Talents, or what other games call Attributes. EPT has six attributes: the familiar Strength, Dexterity, Constitution, and Intelligence, as well as Psychic Ability instead of Wisdom, and Comeliness instead of Charisma. These are rolled on percentile dice (d100). I kept these, though I renamed Comeliness to Appearance.

I decided that since EPT was based off of OD&D, which only had one level above and below average for attributes, I needed to use a different D&D as the base for the new game. I chose B/X D&D, because it has three levels above and below average. (Actually, I used Labyrinth Lord since it's OGL and more readily available.) Since D&D uses 3d6 for attributes, I had to translate the dice ranges to percentile. Luckily, the standard B/X ranges fall nicely into sensible percentile ranges. The other thing this gives the game is an easy translation to 3d6, if a Referee wants something closer to B/X. Below is a table of the 3d6 to d100 translation.

The other thing B/X gave me was consistent modifiers at each attribute level, from -3 to +3. Since EPT only had two below average levels, and nobody wants to play at the -3 level, I combined the bottom two levels into one -2 range. Below is the table for all attributes.

As far as what each attribute does, in EPT all of the modifiers apply only to the to-hit and damage rolls. If a character had STR, DEX, CON, and INT in the 96-100 range, their to-hit/damage modifiers would be +8/+6. There are other effects that attributes give characters, but the numerical modifiers are limited to combat.

I really like that B/X attribute modifiers have a wide range of effects. Strength has the normal to-hit and damage bonuses, Dexterity affects Armor Class, missile weapon to-hit rolls, and optionally Initiative, Constitution affects hit points, Intelligence modifies the number of languages known and language proficiency, Wisdom affects saving throws against magic, and Charisma modifies reaction rolls and retainers. So in the new game, I used most of these.

There are changes to Intelligence related to skills, but that is a topic for another post. This ends the first part of this set of articles. The next article will deal with Original and Professional skills and spells.