Con of the North Tékumel Track, Part I

(I apologize for the lateness of this report. I really had to getmy dad's taxes for two years finished, as well as my own.)

The Tékumel Track I organized at Con of the North in February went off in grand style. We had 40 hours of games over the weekend, including adventures run by Don Kaiser, Stephen Vossler, and myself, a wizard duel miniatures game of my own design inspired by War of Wizards, Tékumel Trivia (I didn't know all the answers) and a Hirilákte gladiators card game from Stephen, and a palanquin street race (with scavenger hunt) miniatures game from Howard Hendrickson. One of the Referees that was scheduled to run games was unable to attend at the last minute, so Stephen and I covered his time slots.

Before I arrived on Friday morning, Stephen Vossler from South Dakota and his players decorated the room with 40 years of Tékumel art. 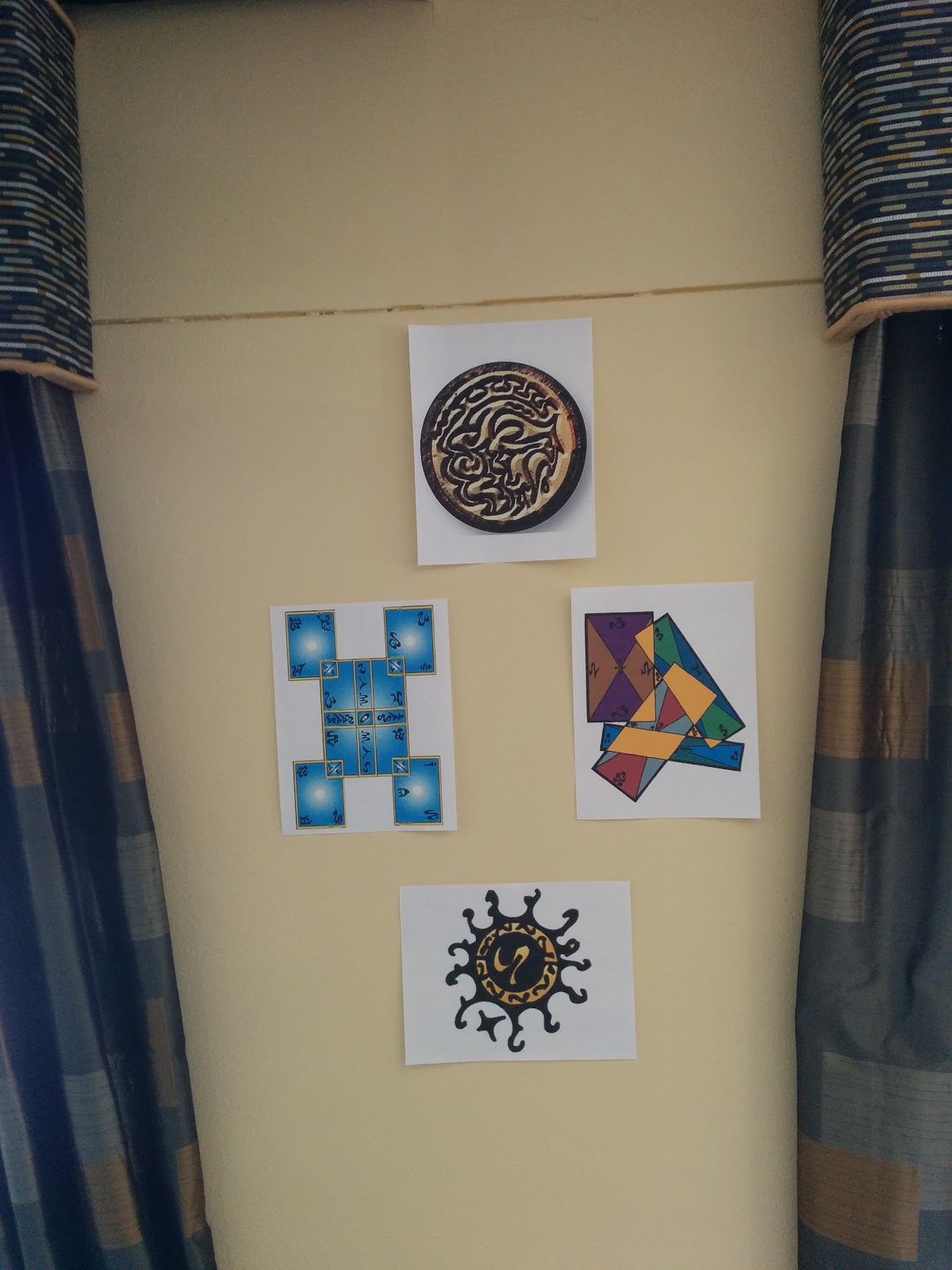 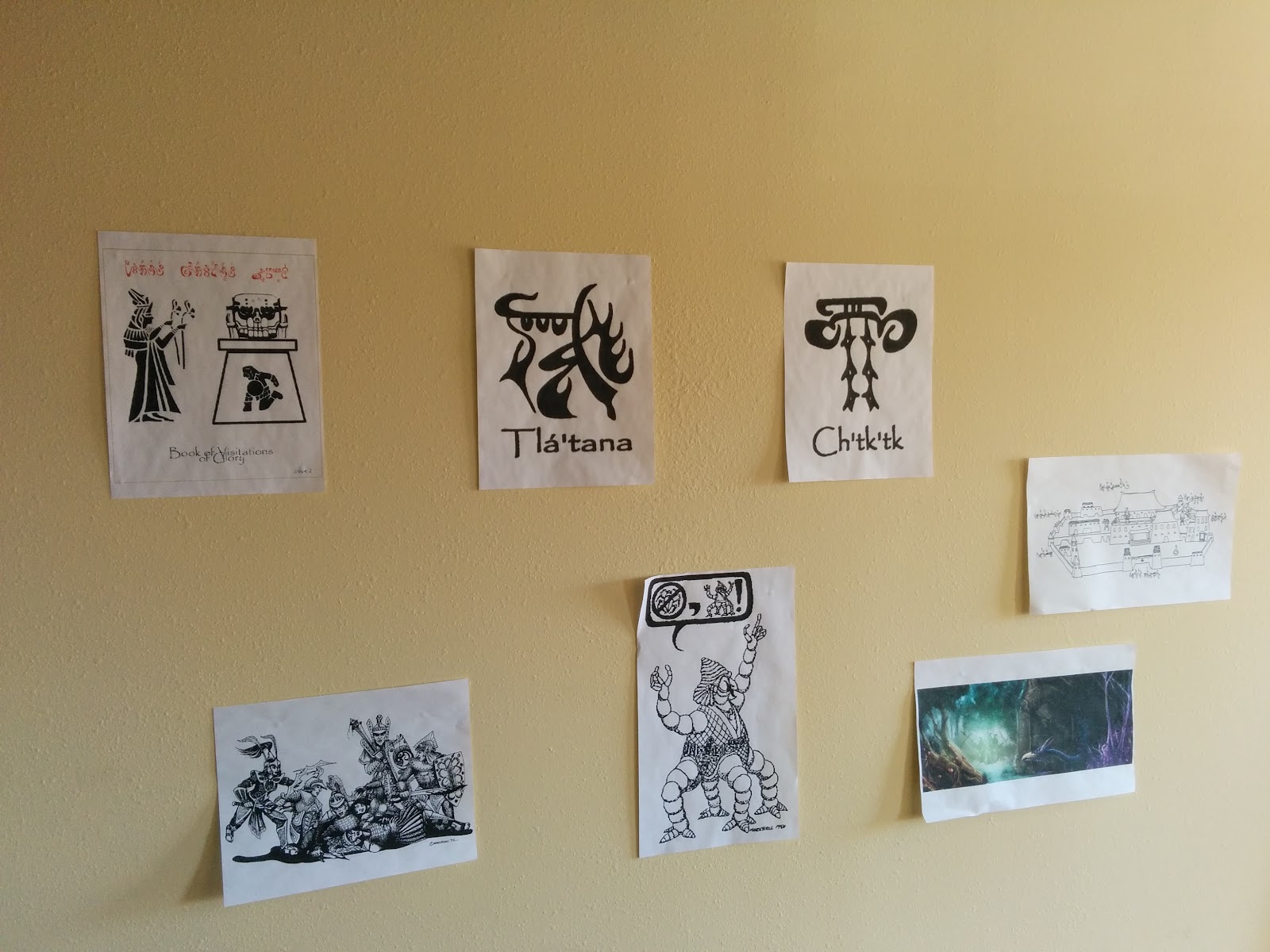 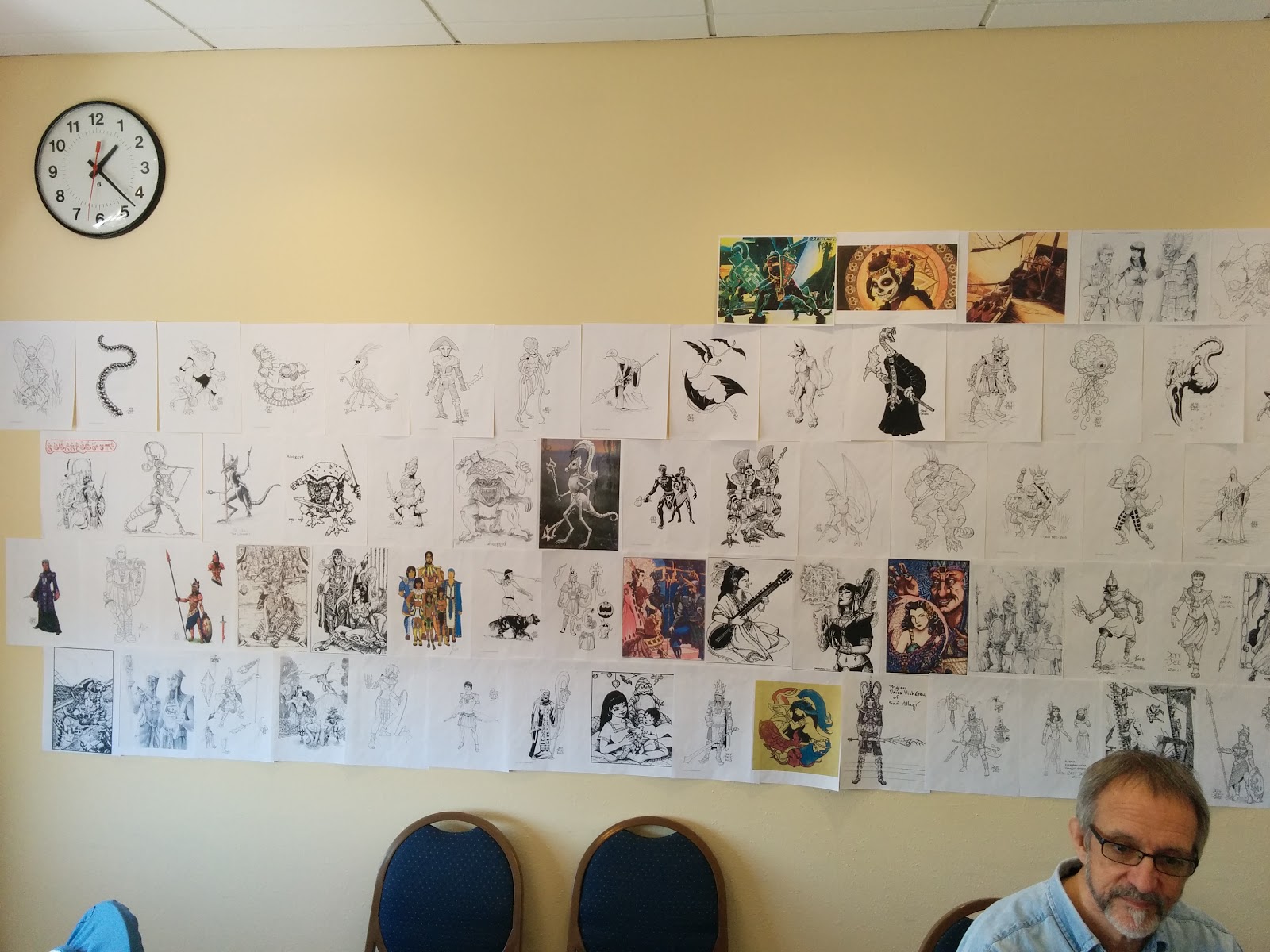 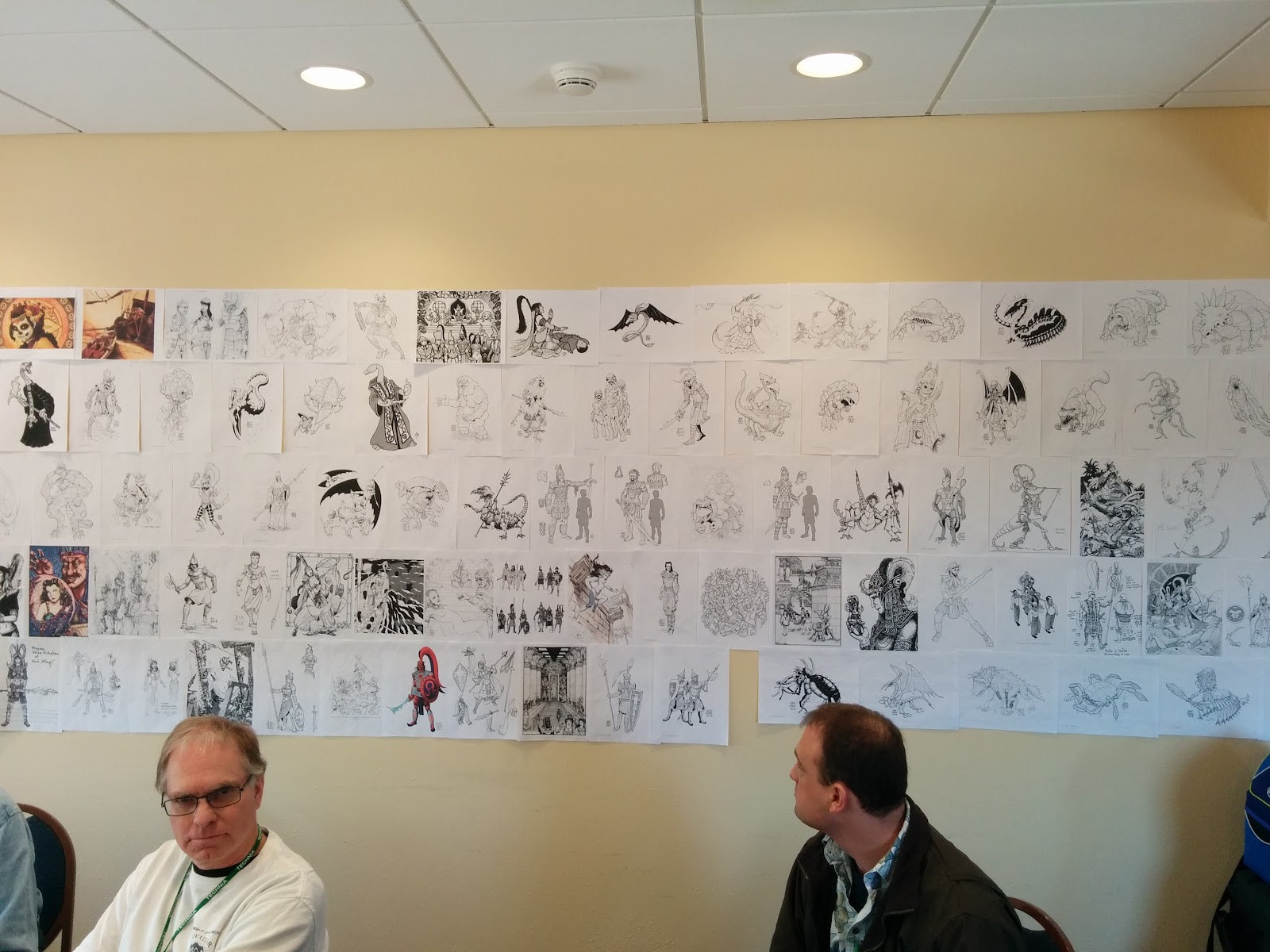 Then the Referees added their own floor plans and maps.

Friday started off with a meet and greet for track participants and referees. Jeff Berry told tales of playing Phil's campaign. Don Kaiser displayed 40 years of Tékumel game products, with some help from me (he didn't have Bethorm). About a dozen folks showed up, besides the referees. 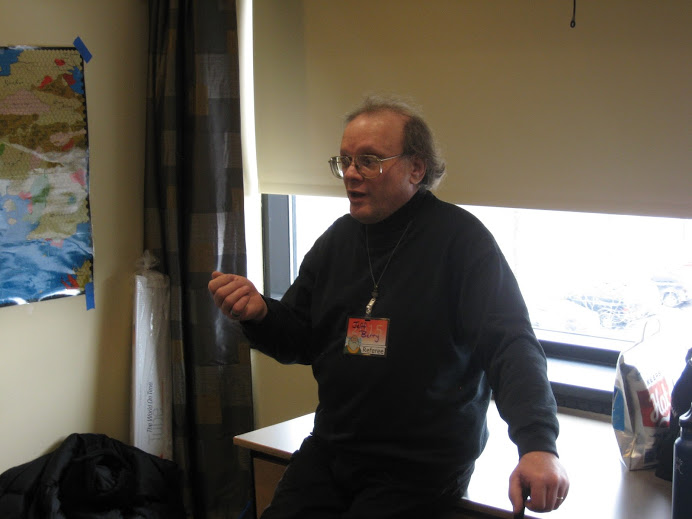 Next up was a session of my Wizard Duel board game. Two non-Tékumel folks came to play, plus a couple of Track-folk. I redrew the arena from a two-wizard arena to a four-wizard arena. The players had fun. One player chased the others with a Wall of Serpents, one of the others summoned a demon right off the bat, and then proceeded to blow the rest of his spell rolls during the game. He ended up being the winner by shooting the last opponent with his trusty bow and arrow after all his spells were exhausted. The mechanics for the Wall seemed to work nicely.

Next was Stephen Vossler's Tékumel Trivia, designed sort of like Trivial Pursuit on a pyramid. We had fun, there were several questions I didn't know the answer to, but I won in the end.

Next came Don Kaiser's Intercalary Intrigue, a little murder mystery during the intercalary days at the end of each year. 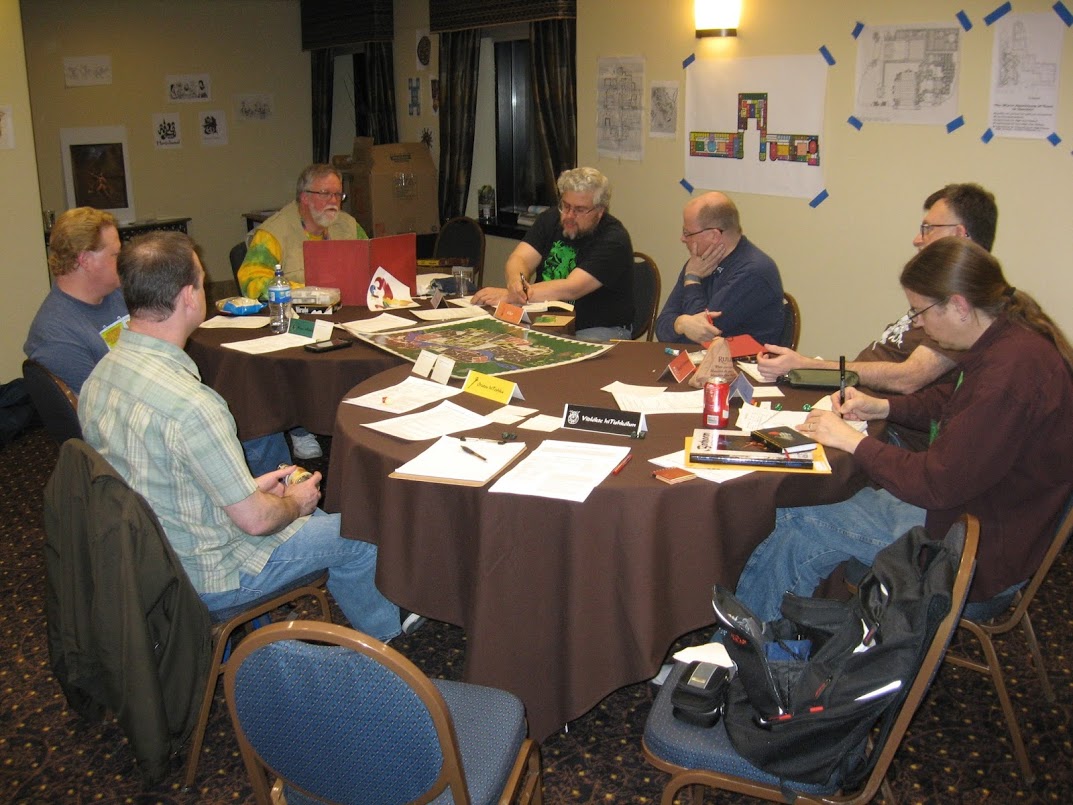 Then came the late night 10pm to 2am game slot, where I ran Heroic Age of Tékumel in a modified version of Dyson's Delve. I called it The Broken Tower of Gilraya Forest. If you're not familiar with Dyson Logos, he's one of the top OSR mapmakers, and due to his Patreon campaign, he pays his rent making maps for us to use. He releases his maps with a free non-commercial license, and at least 2 maps a month are released with a free commercial license (starting this month). I love his style and attention to detail.

A small group of Pygmy Folk was discovered, making furniture to sell in the Rǘ marketplace. Also a bunch of undead were discovered. Tombs were looted.

End of Part I