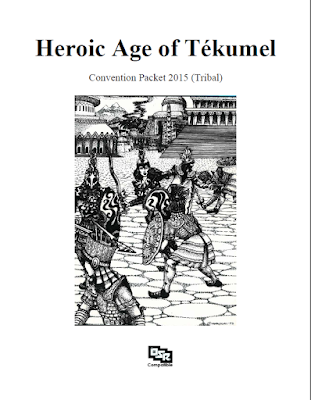 I said I was going to put this up a couple weeks ago. Then I found a few places where I hadn't taken out everything non-tribal, especially spells. Also, there were a couple things I wanted to add for Tribal games, such as the Tribal Name generator and Random Tribe Generator. So it took me longer than anticipated to get it done.

So here is the 2015 Convention Packet for Heroic Age of Tekumel. This will allow you to create 1st level barbarian tribe members. It is designed for a "Fresh Off the Boat" game I'll run at U-Con in Ypsilanti, Michigan in November and at Con of the North in the Twin Cities, Minnesota in February 2016.