After reading and playing several OSR clones, I've started to piece together the set of rules I'd like to run with for my generic fantasy games. I feel like Dr. Frankenstein, procuring the best parts from various corpses to make his masterpiece monster. So I present to you ... 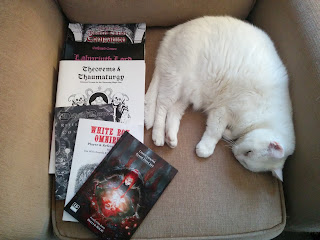 Labyrinth Lord as a base

Lamentations of the Flame Princess


I'm sure there's more, but this looked like a good base to start from.