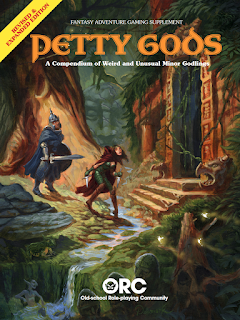 Someone (+Joel Priddy) was asking about random god tables, and I suggested the index of Petty Gods. I think I'll test out my hypothesis.

Meet the Seven Mysterious Beings, pantheon of the Nowallu tribe of Outer Phrenobia.

Now that's a pantheon that speaks about the culture. Six Chaotic gods and one seemingly minor Lawful god. Then again, perhaps the power of the baby laugh can nullify the power of Chaos.