Tékumel has a reputation for being difficult to GM. One complaint goes that who but Barker can properly GM Tékumel. The world is so rich and so detailed that only the Professor would know enough. Another complaint is that a GM must read every word written about Tékumel to do it properly. This article will try to debunk those notions, and give my personal advice on how to get started.

I think the best way to introduce players to this wonderfully detailed world is to start their characters with as little knowledge of Tékumel as the players have. This means using a "Fresh Off the Boat" beginning scenario, where the characters are tribal barbarians from a distant (and simpler) part of Tékumel, a milieu more familiar to players. Primitive tribes are similar on Earth and on Tékumel.

The other choice to make is in the matter of rules. Five sets of official rules have been written for Tékumel: Empire of the Petal Throne from TSR, Swords and Glory from Gamescience, Gardasiyal from Theater of the Mind Enterprises, Tékumel: Empire of the Petal Throne from Guardians of Order, and Bethorm: The Plane of Tekumel from UniGames. Several other rules sets have between written specifically for Tékumel, including Tirikelu and The Petal Hack. There are also quite a few generic systems that have been adapted to Tékumel, like GURPS and BRP. Each of them has advantages and drawbacks, which I won't go into here.

For me, the original Empire of the Petal Throne rules are the best place to start. My reasoning goes as follows: 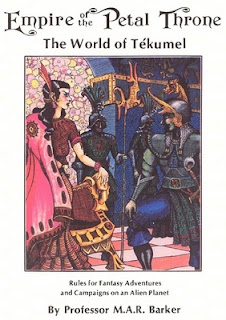 The biggest drawback to EPT's background material is the spell system, to my mind. A member of any temple can learn any spell, which goes against canon in all the other games. To overcome this shortcoming, I will provide a simple solution: ignore canon. Since the PCs will be barbarians from a distant land without the same temple structure as Tsolyanu, they won't be in the temples anyway. Magic users will be primitive shaman, a great justification for having 'the wrong spells'.

Once you've read the EPT rules, the next step is to get more familiar with Tékumel. For this I have a low-cost suggestion -- read The Man of Gold and Flamesong, the first two novels by Professor Barker. Man of Gold has Kindle and POD versions. I found many old paperback copies of each for just a few bucks including shipping on Amazon and ABEBooks.com. These books give you a feel for the world and how things work.

Now, find some guinea pigs friends who want to try something new. Pick a type of terrain (forest/jungle/mountain/seashore/plains). Then tell them they are members of a tribe that lives in that terrain. Have them roll up EPT characters. Some of the skills may not be appropriate (e.g. Mountaineer in a plains tribe), so either have them reroll those skills, pick a reasonable one from the same list, or have them make up a new, better-fitting non-combat skill.

You now have your erstwhile tribes folk -- they need a reason to be in Tsolyanu. There is nothing like a disaster to get people moving. The disaster could be environmental (drought, locusts, erupting volcano), economic (crash in dna-grain prices), or political (war, invading marauders, etc.). Pick a disaster. Force the tribe off their land and onto a ship headed for Jakalla or, if you are truly perverse, Penóm (my first GMs were truly perverse).

An article in the Eye of All-Seeing Wonder #1 gives exactly this beginning. It's called Welcome to Jakalla by Michael Cule. A really good thing about this article is that it supplies a large amount of description of what the characters experience. I recently used this as the basis for a game that I was commissioned to run last month. I changed the mission at the end of the adventure, but the setup is so good I kept it all. This adventure has the entire tribe moving to Tsolyanu, which makes for a good base to start with. If When characters die, they can roll one of the other tribes folk. It also gives the players a common goal: the survival and growth of the tribe.

Now you have a solid starting point for adventures in the Imperium. Who knows, maybe the characters will get into a temple or maybe even a clan!