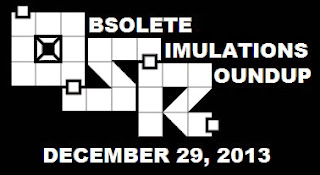 I chose Chivalry and Sorcery by Ed Simbalist and Wilf Backhaus, published by Fantasy Games Unlimited in 1977. It was my group's go-to game for fantasy for seven years. We got very good at cranking out new characters with calculators (yes, it has multiplication and division in the chargen process) in 20-30 minutes.

C&S marries a historical medieval setting with the typical fantasy characters and themes of most FRPGs. The first edition uses a minuscule font size (5 point) and crams an enormous amount of information into a single volume (The C&S Redbook, a reworked and edited PDF of the original is 338 pages -- ginormous for 1977). 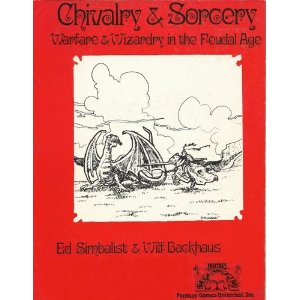 Wikipedia has a very detailed description of the game, so I'll focus on just a few aspects I really like about the game over a couple of blog posts.

One of the things I really like about C&S was that character generation rules were included for a wide variety of player races. Sure you could play an elf, dwarf, or a hobbit (yes, the first edition had hobbits), but also a lycanthrope, kobold, goblin, orc, hobgoblin, bugbear, Ogre, troll, vampire, dragon, or player's choice. Actually, many more are possible, since C&S introduces the idea of monsters with levels.

To show this, I've typed up one of my characters from back in the day:

The next installment will be about the magic system and those Jewelsmiths.

Email ThisBlogThis!Share to TwitterShare to FacebookShare to Pinterest
Labels: C&S