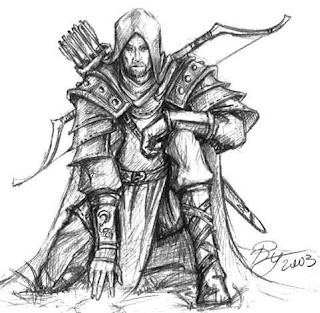 (A friend was looking for a Delving Deeper ranger class and no one fessed up. So I wrote one for him.)

Rangers are highly trained fighters of the wilds, using stealth and woodcraft to defeat their enemies. They fight most effectively against goblins and giants, learning their ways and weaknesses to protect the wilderness from their deprivations.

They may wear leather or chain armor and shields, as well as wield any weapon. Rangers can use magic swords and most other weapons, especially missile weapons.

As a protector of the wild places and the plants and animals therein, a ranger's greatest enemies are the goblins and giants. A ranger may add their level to the damage when fighting goblins, hobgoblins, orcs, bugbears, ogres, trolls, and giants.

Rangers are especially skilled in woodcraft techniques including:
A ranger accomplishes all of these with a throw of 3-6 on a six-sided die.

Strength is the Prime Requisite of Rangers.


A ranger requires 240,000 experience points per level beyond the 12th.
A ranger adds one hit die per two levels beyond the 9th.

(This class is mostly drawn from +James Spahn and his White Box Companion, before converting to DD. Thanks for your inspiration.)