I'm starting a classic Traveller campaign (described here) where the crew is exploring after a nearby supernova event. I've been putting my prep notes here.

A few years ago when I was prepping to run a similar campaign online, I redesigned the Scout/Courier slightly using the High Guard fuel rules (posted here).

Then two weeks ago when I started gathering the resources to prep this, I found my copy of the Steve Jackson Games' Sulieman-Class Scout/Courier deck plans. In that set, they give three variant Suleiman Class scouts: the Seeker mineral survey ship, the Detached variant with 6 staterooms, and the VIP courier with a master suite instead of two staterooms. 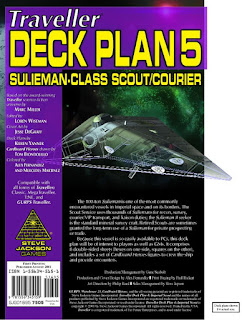 Today I give you the modified Detached Scout/Courier using the same house rule as my previous design.

This is the ship my player get to explore the local area.